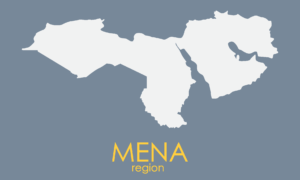 Cambridge Support in the MENA Region

Historically, the MENA region (the Middle East and North Africa) has been characterized by crises and turbulence, from the Arab Spring to Iraq’s invasion of Kuwait to more recent instabilities—such as the economic collapse in Lebanon; anti-regime protests in Iran; and the regional impact of the war in Ukraine, which has triggered food insecurity across MENA. In addition, water scarcity throughout the region is exacerbating humanitarian concerns and political tensions.

The United States (US) has an enduring commitment to the territorial defense of its partners and has long been dedicated to alliances with several MENA countries; this includes close ties with Egypt, Israel, Qatar, Saudi Arabia, the United Arab Emirates (UAE), and others. While the US presence in the Gulf developed with an economic security motivation necessitated by reliance on the Middle East’s natural resources, the multi-faceted need for regional stability in the area has now far surpassed that single objective. MENA might appear to be a secondary foreign policy concern in 2023, but the US remains highly engaged—consider the US role as mediator of the recent Lebanon-Israel Maritime Agreement. In addition, President Biden’s visit to Egypt for the Climate Change Conference in November signaled continued attention to partnership beyond military cooperation.

Indeed, the political, economic, and security connections the US has forged in MENA are more relevant than ever, especially considering the region’s geographical status as a gateway between hemispheres, essential to global trade and security. Two of the world’s most crucial maritime chokepoints are in MENA: the Strait of Hormuz and the Bab-al-Mandeb, which connects the Red Sea and the Gulf of Aden. One-third of the world’s oil and other resources are shipped through the Strait of Hormuz and then through the Bab-al-Mandeb and on to Europe as the next gateway. In addition, smuggling and other illegal disruptions to legitimate commerce are problematic in the Red Sea. Regional hostility, counterrevolutions, authoritarian oppression, institutional failings, and the influence of recent great power aggression have increased the threat to freedom of navigation through MENA’s waterways. Maritime and border security in the region will remain an urgent priority for the US and the world.

The longstanding answer to global maritime security concerns has been to advance cooperation through development of maritime alliances, coalitions, and partnerships that are capable, stable, and above all interoperable. To that end, it has been important to think strategically about protecting US interests and intellectual property while also making thoughtful decisions relating to exportability, so that as we bring programs, systems, and capabilities to our partners and allies in MENA, we do so to gain the greatest interoperability and the widest collective domain awareness that supports both partner and US national interests.

Cambridge International Systems, Inc. (Cambridge) has been delivering security, implementation, and technical support services to the US and its partner nations for nearly three decades. We do not seek publicity and renown. It is not in our customers’ best interest. But across more than 55 countries, we have been providing solutions and services to support US security interests and those of our NATO and non-NATO partners across the globe. This includes the continuous and uninterrupted support we have provided within the MENA region for 28 consecutive years.

By refining the processes, workforce, training, and logistics to effectively operate within this special and important region; understanding the criticality of Maritime Domain Awareness (MDA) and surveillance systems; and designing MDA and border security solutions that advance this distinct mission area’s cooperative requirements, Cambridge advances US security and international stability. Our method is to develop technically agile, customized, and forward-thinking design approaches—bigger, more expensive, or more complicated is not always better – but we never compromise on interoperability.

The US is the maritime powerhouse. As the Commander of Naval Sea Systems Command (NAVSEA) has proudly stated: “The US Navy protects America’s interests at home and abroad by maintaining maritime superiority, deterring aggression, and providing humanitarian assistance.” Its ships and submarines are “the cornerstone of our Navy’s success.” Yet even as far-reaching as this tremendous naval power is, the vastness of our global oceans, seas, and gulfs and the movements they support—commercial, military, illicit—means that maritime security must be cooperative in nature. This is the maritime legacy—for centuries the Law of Admiralty and the “rescue doctrine” has induced those on the seas to answer the call of distress. Today’s call for maritime cooperation in MENA is no less real and arguably more difficult given the expanded number and sophistication of actors (nefarious and reputable) operating within the region’s waterways; the impact of great power rivalry; and the intensifying of security challenges in the Red Sea. The reasons to engage have evolved, and thus US priorities in the region must be refined, but there is no doubt that we will continue to expand and diversify domain awareness, cooperation, and interoperability in MENA.