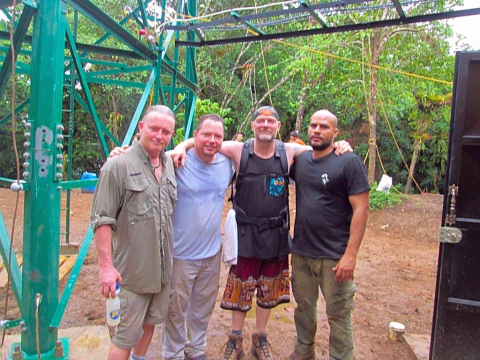 The Cambridge radar team, led by Doug Hunter, has been hard at work these last several weeks delivering a radar tower and surveillance system for the Forever Costa Rica organization on Cocos Island. The island, which is 550 km off the Pacific coast of Costa Rica, is a UNESCO World Heritage Site and does not allow inhabitants other than Costa Rican Park Rangers and the temporary stay of a few volunteer workers.

Cambridge staff travelled to the island by ferry with personnel from Compañía Nacional Fuerza y Luz (Costa Rican National Power and Light Company), who assisted Cambridge with the transport of equipment from the boat to the beach as well as up the mountain to the different communications sites. Due to the remote location, our team had to travel with all of the necessary food, water, personal supplies, tools, radar system equipment and a thirty (30) meter tower to execute this project. Preparation for this endeavor was extremely detailed because the team had to be self-sustaining while completing a multitude of tasks that are complicated under normal circumstances – installing a surveillance system at Cocos Island is far from normal.

Doug and his team member Gonzalo Gomez of the Cambridge Colombia office have encountered many unwanted visitors during their stay on the island including large spiders, scorpions and wild boars. However, last week the Cambridge team was very pleasantly surprised by a visit from Les Stroud, star of the TV show “Survivorman.” Les is no stranger to enduring remote locations and surviving with no food, no shelter, no water, and no tools readily available. The Cambridge staff, prompted by Les’ interest in our work, treated Les to a tour of the equipment at the surveillance center and the radar site. Les also observed the radar tower Cambridge had constructed.

Les informed Doug that the conservation community is very aware of the radar Cambridge is installing on the island and that they are eager to see the results when the system is operational. The new radar and surveillance system is specifically designed to combat illegal fishing from various offenders and will improve maritime security and coastal conservation efforts in the waters around the island. Cocos Island and its surrounding waters are home to hammerhead sharks, leatherback sea turtles and more than 30 unique marine species found nowhere else in the world that are threatened by illegal fishing and poaching.